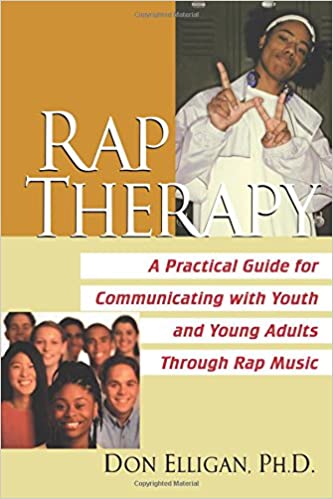 A break-through guide for parents and care-givers on how to better understand and communicate with kids and young adults by listening to and understanding rap music--together. The hip-hop industry brings in billions of dollars each year. Sean Jean, FUBU, Ecko Unlimited, No Limit, Roca Wear--those are just a few of the hottest names in hip-hop music, not to mention the clothing lines of Russell Simmons and Sean P. Diddy Combs, which raked in $100 million and $24 million dollars last year, respectively. And the influence of rap music is even more culturally pervasive as noted in the recent theatrical success of 8 Mile starring Eminem, and the success of such prevalent rap stars as Ja Rule, DMX, and P. Diddy, among others. As in eras past, most adults feel they have no understanding of today's young people, and especially when they try to listen to rap or hip-hop music. In Rap Therapy, psychologist Don Elligan tries to bridge the gap between parents and kids by using rap as a way to get into kids's psyches by asking them who their favorite artists are, as well as their favorite raps. By listening to the raps with them and trying to appreciate and comprehend their content. Dr. Elligan and his clients started to share a bond, as they began to speak in a shared language and understanding. Dr. Elligan's rap therapy helped to break down communication walls, and was a necessary starting point for a real and positive dialogue. Now, in Rap Therapy, Dr. Elligan has made his revolutionary therapy treatment and techniques available for any parent or care-giver who wants to improve communication--thoughts, feelings, emotions, and goals--with a child or young adult who loves to listen to rap andhip-hop music. And given the meteoric rise of these musical genres--from the inner-city to the middle-class suburbs--Rap Therapy will prove to be the comprehensive and important bridge between parent and child.