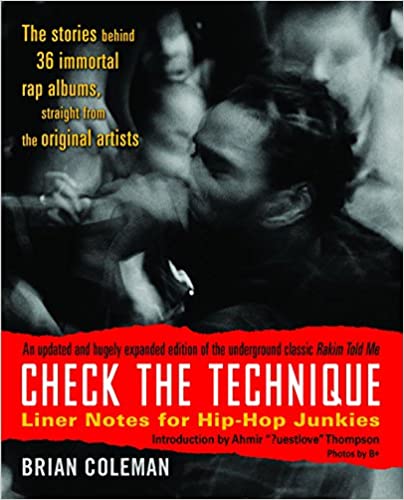 A Tribe Called Quest • Beastie Boys • De La Soul • Eric B. & Rakim • The Fugees • KRS-One • Pete Rock & CL Smooth • Public Enemy • The Roots • Run-DMC • Wu-Tang Clan • and twenty-five more hip-hop immortals It’s a sad fact: hip-hop album liners have always been reduced to a list of producer and sample credits, a publicity photo or two, and some hastily composed shout-outs. That’s a damn shame, because few outside the game know about the true creative forces behind influential masterpieces like PE’s It Takes a Nation of Millions. . ., De La’s 3 Feet High and Rising, and Wu-Tang’s Enter the Wu-Tang (36 Chambers). A longtime scribe for the hip-hop nation, Brian Coleman fills this void, and delivers a thrilling, knockout oral history of the albums that define this dynamic and iconoclastic art form. The format: One chapter, one artist, one album, blow-by-blow and track-by-track, delivered straight from the original sources. Performers, producers, DJs, and b-boys–including Big Daddy Kane, Muggs and B-Real, Biz Markie, RZA, Ice-T, and Wyclef–step to the mic to talk about the influences, environment, equipment, samples, beats, beefs, and surprises that went into making each classic record. Studio craft and street smarts, sonic inspiration and skate ramps, triumph, tragedy, and take-out food–all played their part in creating these essential albums of the hip-hop canon. Insightful, raucous, and addictive, Check the Technique transports you back to hip-hop’s golden age with the greatest artists of the ’80s and ’90s. This is the book that belongs on the stacks next to your wax. “Brian Coleman’s writing is a lot like the albums he covers: direct, uproarious, and more than six-fifths genius.” –Jeff Chang, author of Can’t Stop Won’t Stop “All producers and hip-hop fans must read this book. It really shows how these albums were made and touches the music fiend in everyone.” –DJ Evil Dee of Black Moon and Da Beatminerz “A rarity in mainstream publishing: a truly essential rap history.” –Ronin Ro, author of Have Gun Will Travel