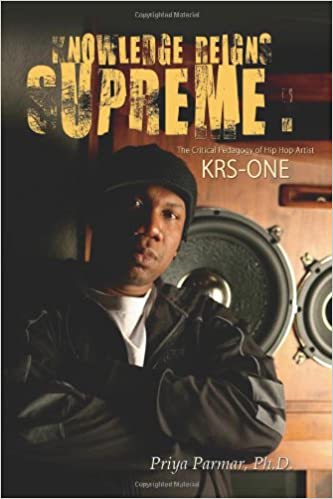 Knowledge Reigns Supreme: The Critical Pedagogy of Hip-hop Artist KRS-ONE argues for the inclusionary practice of studying and interpreting postmodern texts in today's school curriculum using a (Hip-Hop) cultural studies and critical theory approach, thus creating a transformative curriculum. Based on the work of Brazilian educator Paulo Freire, the text argues that the implementation of teaching strategies and techniques derived from Hip-hop culture and specifically the rap lyrics of legendary Hip-hop pioneer and activist, Lawrence Parker, aka KRS-ONE (Knowledge Reigns Supreme Over Nearly Everyone) is an empowering, liberating pedagogy for educators, prospective educators and students of diverse backgrounds. The purpose of Knowedge Reigns Supreme ... is to analyze and critique KRS-ONE's rap lyrics as a postmodern text and as one concrete example of critical literacy, particularly because of the emancipatory potential it has for educating all youth, regardless of race, class or ethnicity. KRS-ONE's lyrical career began in 1986 and continues today with the inclusion of lecture tours and performances at universities nationally and internationally. He is one of the most sought after collegiate speakers in the country, visiting over 200 universities, including: Clark, Yale, Moorehouse, Columbia, Harvard, Princeton, Temple, Howard, Spellman, and UCLA Knowledge Reigns Supreme ... also provides educators with pedagogical strategies that can be implemented in the classroom. Educators teaching courses in pedagogy, language arts, social studies, research and methodology at the high school (9-12), undergraduate and graduate levels will find the contents of this text useful.