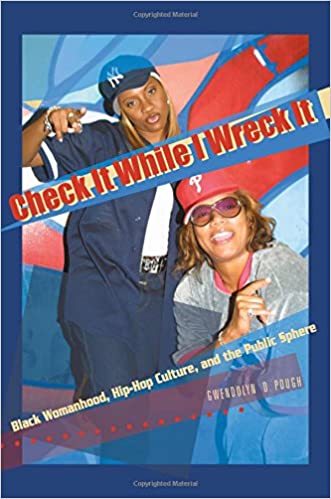 Check It While I Wreck It: Black Womanhood, Hip-Hop Culture, and the Public Sphere

Hip-hop culture began in the early 1970s as the creative and activist expressions -- graffiti writing, dee-jaying, break dancing, and rap music -- of black and Latino youth in the depressed South Bronx, and the movement has since grown into a worldwide cultural phenomenon that permeates almost every aspect of society, from speech to dress. But although hip-hop has been assimilated and exploited in the mainstream, young black women who came of age during the hip-hop era are still fighting for equality.In this provocative study, Gwendolyn D. Pough explores the complex relationship between black women, hip-hop, and feminism. Examining a wide range of genres, including rap music, novels, spoken word poetry, hip-hop cinema, and hip-hop soul music, she traces the rhetoric of black women "bringing wreck." Pough demonstrates how influential women rappers such as Queen Latifah, Missy Elliot, and Lil' Kim are building on the legacy of earlier generations of women -- from Sojourner Truth to sisters of the black power and civil rights movements -- to disrupt and break into the dominant patriarchal public sphere. She discusses the ways in which today's young black women struggle against the stereotypical language of the past ("castrating black mother," "mammy," "sapphire") and the present ("bitch," "ho," "chickenhead"), and shows how rap provides an avenue to tell their own life stories, to construct their identities, and to dismantle historical and contemporary negative representations of black womanhood. Pough also looks at the ongoing public dialogue between male and female rappers about love and relationships, explaining how the denigrating rhetoric used by men has been appropriated by black women rappers as a means to empowerment in their own lyrics. The author concludes with a discussion of the pedagogical implications of rap music as well as of third wave and black feminism.This fresh and thought-provoking perspective on the complexities of hip-hop urges young black women to harness the energy, vitality, and activist roots of hip-hop culture and rap music to claim a public voice for themselves and to "bring wreck" on sexism and misogyny in mainstream society.