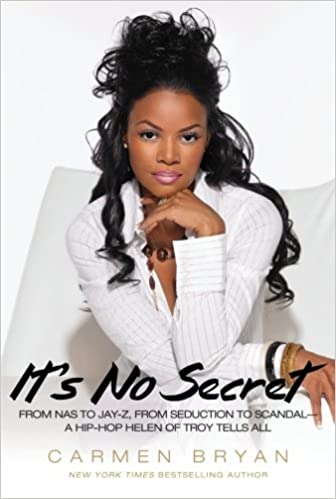 It's No Secret: From Nas to Jay-Z, from Seduction to Scandal--a Hip-Hop Helen of Troy Tells All

Carmen Bryan is no stranger to the rap world. Not only did she work at Def Jam and Capitol Records but she shares a daughter with hip-hop superstar Nas -- a relationship made extremely public through Nas's celebrity status, rap lyrics, and the ever-present media. Now, in It's No Secret, a strong, resilient Carmen bares all, telling her side of the story and leaving no detail unturned -- with the true candor and raw emotion of someone who has been there, done that, and survived. From a clandestine relationship with Nas's biggest rival, Jay-Z, that stirred up the biggest feud in hip-hop history, to seeing her reputation in tatters and a once loving relationship with Nas fall apart, Carmen depicts her trying journey to become the strong woman and mother she is today. After years of turmoil that included drugs, sex, greed, and violence -- and abandoning what she had always prized above all, her freedom -- Carmen took a stand, focusing on herself. After years of pursuit by the media, Carmen sets the record straight in It's No Secret -- and has no regrets.