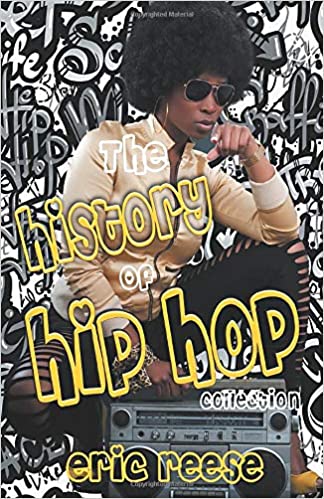 The History of Hip Hop Collection

The only Hip Hop Book Collection that explains the culture fully in the fewest words! *** Author of "Rapper's Delight" essay currently archived at the Library of Congress *** *** Guest speaker of BBC2 Radio "Rapper's Delight 40th Anniversary" by DJ Trevor Nelson - September 2019 *** Whether you are a fan of hip hop or you are just curious about it, you will not have to look further after finding Eric Reese's The History of Hip Hop. This concise but in-depth book explores all the distinguishing traits of what is not only a genre of music but a lifestyle. Reese traces the history of hip hop from its beginnings in the 1970s and reveals how it changed in the next decades until it became a worldwide phenomenon. The author gives attention to the influence of hip hop at every level, including art and fashion. He also makes valuable considerations about its originality in comparison with other genres. From the pages of The History of Hip Hop, you will realize the impact hip hop has on our society. Reese explains every aspect of its powerful influence and considers it not only as a musical genre but as a way of living. I like that after exploring the origins of hip hop and its meaning for African Americans, Reese included references to its worldwide presence. It shows its importance better than anything else. Reese's style is essential and clear. He does not linger on long and superfluous dissertations, but he goes straight to the point and enlightens the key concepts with clarity. At the end of The History of Hip Hop, you can be sure you will have all the elements to understand hip hop. You will also know what sets it apart from other musical genres. In short, you will have a clear picture in your mind, and you will be able to understand hip hop better. - Reviewed By Astrid Iustulin for Readers' Favorite Hip Hop Truth for the Art and Pulse of America! Hip Hop has told the tale and now it's time to reflect back... This cultural brilliance of sound presented a voice detailing life growing up in the streets of America's largest cities of color as far back as the 1920s. Sprung from the spirits of hustle and grime, this urban culture quickly uncovered an amazing group of forces of nature eager to express their personal narratives and contribute to the art of music. Hip Hop has reached the doorsteps of everywhere on the planet and rightfully so. This collection from my History of Hip Hop Book Series gives you the ins and outs of the rap genre from the beginning to present. In this book, I provide you with simple perspectives (for beginners to advanced - student to professor) of the following: Differences between Hip-Hop and Rap Earliest Influences Examples of Hip Hop & Rap culture What is the Underground? Myths & Theories Greatest Moments Hip Hop's Genres (must-read) Global Impact And much more... As this music legacy continues to expand its sway, know for sure it's here to stay. History of Hip Hop Collection gives you a direct-straight to the point history of the indisputable legendary force of rap artists and their deejays. Hip Hop lives on! Get it now!