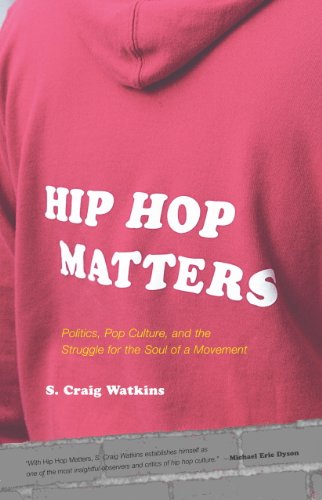 Hip-Hop Matters: Politics, Pop Culture, and the Struggle for the Soul of a Movement

From its humble beginnings in the Bronx to its transformation into a multibillion-dollar global industry, hip hop has stirred constant and contentious debate. Avoiding the simple caricatures that either celebrate or condemn this powerful movement, S. Craig Watkins produces one of the most thorough accounts of hip hop yet. Hip Hop Matters delves deeply into the phenomenal world that hip hop has created and comes up with a portrait that is as big, brave, and vibrant as the movement itself. Readers see the brilliance and blemishes of hip hop's entrepreneurial elite and also discover a thriving digital underground, hip-hop inspired literature, young political activists, and the movement's own intelligentsia. Watkins punctuates this meticulously researched book with revealing anecdotes and astute analysis of the corporate takeover of hip hop, the culture's march into America's colleges and universities, and the rampant misogyny threatening hip hop's progressive potential. He also offers revealing portraits of some of hip hop's most intriguing personalities-Sylvia Robinson, Grandmaster Flash, Chuck D, Jay-Z, Hype Williams, and Eminem-and influential brands-FUBU and Def Jam. Ultimately, we see how the struggle for hip hop reverberates in a world bigger than hip hop: global media, racial and demographic change, the reinvention of the pop music industry, urban politics, the moral and public health of young people, and their relentless desire to be heard and respected. It is the spectacular convergence of these and other issues that makes hip hop one of the more compelling stories of our time. Which people and what forces are vying to control a movement that has become a lucrative pop culture industry as well as an insurgent voice for the young and the disenfranchised? Watkins's incisive and timely book decisively answers the question and shows why now, more than ever, hip hop matters.