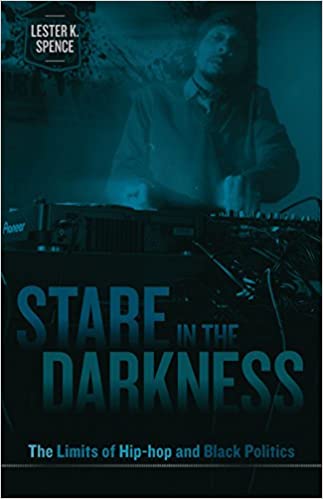 Stare in the Darkness: The Limits of Hip-Hop and Black Politics

Rap’s critique of police brutality in the 1980s. The Hip Hop Political Convention. The rise (and fall) of Kwame Kilpatrick, the “hip-hop mayor” of Detroit. Barack Obama echoing the body language of Jay-Z on the campaign trail. A growing number of black activists and artists claim that rap and hip-hop are the basis of an influential new urban social movement. Simultaneously, black citizens evince concern with the effect that rap and hip-hop culture exerts on African American communities. According to a recent Pew survey conducted on the opinions of Black Americans, 71 percent of blacks think that rap is a bad influence. To what extent are African American hopes and fears about hip-hop’s potential political power justified? In Stare in the Darkness, Lester K. Spence answers this question using a blend of neoliberal analysis, survey data, experiments, and case studies. Spence finds that rap does in fact influence black political attitudes. However, rap also reproduces rather than critiques neoliberal ideology. Furthermore, black activists seeking to create an innovative model of hip-hop politics are hamstrung by their reliance on outmoded forms of organizing. By considering the possibilities inherent in the most prolific and prominent activities of hip-hop politics, Stare in the Darkness reveals, in a clear and practical manner, the political consequences of rap culture for black publics.